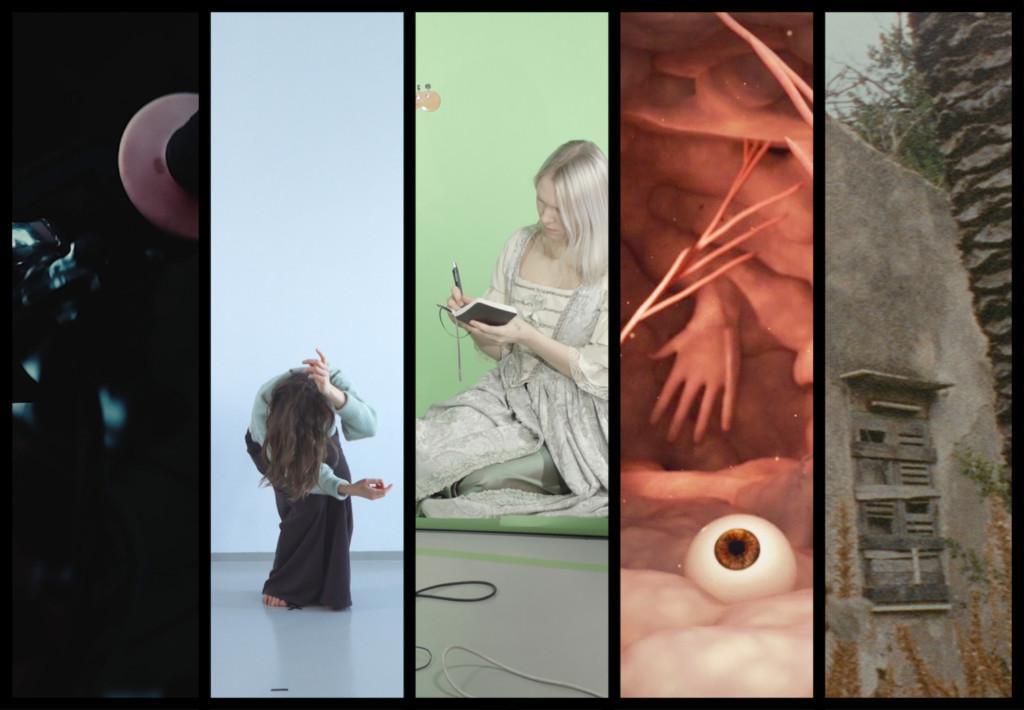 The Video Weeks, which debuted in spring 2020 in an exhibition collaboration between Sinne and AV-arkki, the Centre for Finnish Media Art, will be held for the second time in summer 2022.

The Video Weeks on 14.6-21.8.2022 consist of a video installation in Sinne’s exhibition space that changes every two weeks. The works were selected through an open call to AV-arkki members, by Pro Artibus Foundation curators Markus Åström and Camilla Granbacka.

The Video Weeks will screen the following:

Born to Feel is a dense collage based on image and sound material from various unfinished projects, as well as on outtakes from previous works. Matti Harju has gone through old hard disks, notes, loose fragments and bookmarks from the Internet and gathered the material into a poetic whole. His aim was to look at what were previously seen as errors, unsuitable elements and mistakes, and to give them a new, meaningful context in which they can seen correctly. In Born to Feel, he has used written text as a point of entry and, above all, with a focus on subtitling, and made it into an underpinning element that binds the whole together. The film has a protagonist, who is present in the form of a subtitle; a narrator who is not on the soundtrack, but whose words can still be read in the film. Such silent narrators are rarely seen in film, but were previously common in RPG games on consoles or PCs. The words is also cut short in the margins – a result of Harju’s use of Pan and Scan, a method previously employed to crop widescreen formats to the 4:3 ratio of CRT TVs. This brings to mind the VHS format and the TV and film tradition that was still alive 30 years ago.

The text is based on a drug experience and is partly autobiographical, but mingled with fiction. Harju has been inspired by trip logs, i.e. chronological descriptions of events and experiences induced by taking drugs. He is interested in the language formed when people try to describe sensations and experiences that are beyond language and the logic of the senses. Born to Feel builds on this and opens up a gap where we can see that even in grid patterns and imaginings there are new insights and potentials to be gained.

The film gets its inspiration from a scene in Waiting for Godot by Samuel Beckett in which the character Lucky does a dance. The drama script, which otherwise has detailed stage directions and dialogue, does not make clear how the actor is to perform the dance. In her artistic work Haikala is interested in texts, especially in passages such as this that are open to interpretation, or in details in margins or in parentheses. Lucky’s Dance has two characters, who dance in front of the camera. Haikala has invited in a professional dancer, Meri Pajunpää, who makes short dance improvisations. Haikala herself is the other character, who studies and memorizes these improvisations and then then repeats them from memory. The piece ends with material in which both dancers imitate trees in motion. It is a study of the relationship between two different bodies, of the interaction between written text and visual material. At the same time, it is a work that looks at memory and the passage of time, and sheds light on questions of freedom of artistic interpretation and its limits. The film has mainly been shot on digital camera, but there are also short passages taken on narrow-gauge film (8mm). On the soundtrack, Haikala herself opens up and talks about the constituent parts and the factors that influenced and inspired the work’s creation.

Eeva-Mari Haikala (b. 1974), lives and works in Helsinki and in Flanders, Belgium. She works with video, performance and photography. Individuality, memory, the body, and humour are all recurrent subjects and elements that constitute themes in her art. She graduated with an MFA from the University of Art and Design Helsinki in 2004. In 2009, she gained her Master’s in the History of Art from the University of Helsinki. In 2016, she defended her practise as research thesis in the Department of Drama, Theatre, and Performance at the University of Roehampton, London. Her solo exhibitions and contributions to group exhibitions and festivals include: Seoul International ALT Cinema & Media Festival, South Korea; Hippolyte Korjaamo, Helsinki; V/MSP Gallery, Brussels; WIELS Project Room, Brussels; Kunsthalle Helsinki; Muu, Helsinki; Kiasma Theatre, Helsinki. Haikala is currently on a three-year grant from the Finnish Cultural Foundation.

Reality slips away, awareness of your body and self is suspended, even feelings and thoughts become alien to you. Dissociation is a recurrent element in film, above all in horror films. But the film experience itself is also seen as on the evocation of a kind of positive dissociation in the viewer.

Dissortion is a film constructed around this concept, the title being a combination of the words dissociation and distortion. It occupies the middle ground somewhere between reality and confusion. Kallio puts two characters who are connected on an emotional level through a series of shifts of time and place. With the costumes, scenography, lighting and compositions, direct links arise with the performing arts, but also with portrait painting. Kallio’s focus is on the baroque because it was an epoch in which reality became a theme for art. In it people worked with dynamic compositions and movement in the subject matter with the aim of reproducing a more real reality. Perspective was used actively, along with reflections in glass and mirror surfaces. Dissortion, too, is in constant motion, but here this involves achieving something intangible. Kallio creates a reality that recedes and becomes less and less coherent. Instead, it addresses the lack of and longing for something to rely on, something that happens repeatedly and which feels stable. What can we turn to for security and warmth in a world that feels unnatural?

Jade Kallio (b. 1978) is an artist and filmmaker who works within various techniques, such as experimental film, performance and installations. Common to all the works that Kallio makes, either alone or collectively, is the use of documentary and speculative fiction, while occupying the borderland between fantasy and the everyday. Kallio’s work has been show at festivals and institutions including: European Media Art Festival (2019, 2017); Beursschouwburg, Brussels (2019); Kunsthalle Osnabrück (2019); International Film Festival Rotterdam (2019, 2017); CCA Derry~Londonderry (2016); HAM gallery, Helsinki (2017); Turku Art Museum (2017); and Sinne gallery, Helsinki (2017).

Henna-Riikka Halonen’s animated film Tissue (The Stage of your Skin) counters speculatively the optimized representations of the body and the demand for a high performance of living and non-living entities. Skin is often seen as a rigid boundary, yet in the face of a constantly progressing entanglements of human bodies, economies, media, and technologies, physical boundaries are becoming increasingly porous. Here, the material tensions, wherein leaks and flows, actively confuse the natural with the synthetic, biological with the technological and fantasy world with the scientifically objective one.

In this film, a series of long takes guide us from a fictional prosthetic factory through the nostril, skin and tissue, through the nervous system into the cell. The modified 3-D model of an animal cell becomes a strange world inhabited by different living and non-living organisms. Here, we see the body as a simultaneously self-contained and porous biological and technological multi-species organism but also a site of conflict.

The work is referring to literary works of Ursula Le Guin (Being taken for granite), Donna Haraway (The Companion Species Manifesto: Dogs, People, and Significant Otherness) and Nikolai Gogol (The Nose).

Henna-Riikka Halonen (b. 1975) is a visual artist who lives and works in Helsinki. She graduated with MFA in Fine Art from Goldsmiths College, London in 2006 and completed a Doctorate at the Academy of Fine Arts, Helsinki in 2020. Halonen uses a wide range of historical and cultural references including Avant-Garde theatre, speculative fiction literature and cinema.

Her recent projects and research are concerned with how relations and spaces are conditioned by technological, ecological, and political developments and are often initiated by a physical encounter with a specific context or a site. By concentrating on different contexts and their current or former inhabitants, she develops worlds within worlds or systems within systems that subvert perceptions, systems, and myths and seek to find forms of resistance using a site’s materiality and fictions as catalysts.

The setting for Jan Ijäs’ latest documentary piece is the small town of Cefalú in Sicily, and more specifically the Abbey of Thelema. During the period 1920–23, the building was the home of the controversial character and occultist Aleister Crowley (1875–1947) and his followers. It was rumoured that shadowy activities, such as rituals involving sex and drugs, were going on in the house, and even that suspicious deaths had occurred. This came to an end in 1923, when Mussolini drove the group out of Sicily and Italy.

Ijäs’ project has its starting point in work begun by director Kenneth Anger and sex researcher Alfred Kinsey in the fifties. Anger and Kinsey were interested in the sex magic and occultism that took place in the building, as well as in the frescoes that Crowley had painted around the house. Anger intended to make a film about the Abbey of Thelema, but by his own account, the finished footage subsequently vanished during the development process in England. Ijäs approaches the place from a slightly different angle. His film is the result of a working process of several years, in which he studied Crowley’s activities during the period in Cefalú. After a diligent search, Ijäs found diaries from that time, not only Crowley’s own writing, but also some by those he lived with, including mistresses and pupils. One of the house rules at Thelema Abbey was that everyone kept a diary. The material provides an insight into their daily lives and describes routines such as cooking, cleaning and child care. The film’s soundtrack consists of two narrators reading excerpts from these diaries. This gives a slightly different picture of the shocking, sensation-seeking persona that Crowley himself created for the public. The footage has been shot on 16mm film using a spring-driven Bolex and focuses on the location and its atmosphere. The first shots were taken back in 2014 and, at that time, some of Crowley’s frescoes were still on the walls. Nowadays, they have all gone. The film premieres at Sinne on August 9.

Jan Ijäs (b. 1975), is a director, screenwriter and producer who lives and works in Helsinki. He studied documentary directing at the Department of Film, Television and Scenography at the Aalto University in Helsinki. His works span avantgarde film, experimental media art and documentary. He frequently deals with difficult social issues. His films have been shown at more than two hundred festivals and exhibition spaces internationally. He has won numerous prizes, among them the Risto Jarva Award at Tampere Film Festival in 2011 and the Amnesty International Award at the IndieLisboa International Film Festival in 2018. Ijäs is currently on a five-year Finnish-State artist’s grant.