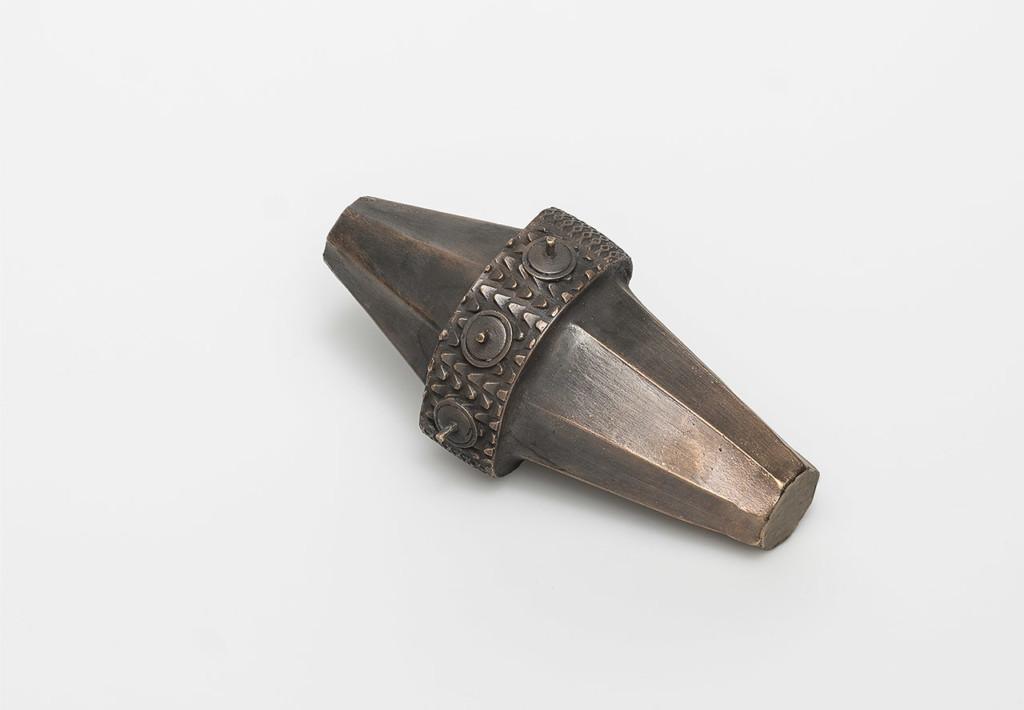 Sinne opens its autumn season with Tiina Raitanen’s Hard. The exhibition is an integrated sculptural whole in which Raitanen puts the focus on things that are hard and difficult. In Hard, she takes enigmatic sculptures and constructs a new entity that sheds light on questions about humanity, work, existential struggle and self-realization.

In her working process Raitanen makes use of worn-out and defective objects from her surroundings. She repurposes discarded components and items that she finds in the urban milieu, reworking and reshaping them so as to coax out the potential and the stories that still lie deep within them. She makes montages and impressions from them, which are then transferred via time-consuming, finely controlled processes to bronze, silver, concrete, glass and Jesmonite. Raitanen is a virtuoso at presenting the sculptural. She has an eye for form, mass and material, and for the way they generate spatial tensions. She sees and understands the materials, their weight, their form and their plasticity.

This knowledge allows her to orchestrate coherent wholes in which each component has a given role and function. This gives the viewer an interesting entry point to following the flow of energies present in the interplay between the various parts of her installations. Raitanen does not fix her works, or give them a final form, but lets them live their own lives as modules. Depending on the place and situation, one work can have various compositions, and parts of different works can be combined, only to grow apart again and seek new forms in new places.

Despite the way that Raitanen’s art seems to emerge fluently and unimpeded, it is still underpinned by solid, single-minded effort. The sculptor’s work is divided into multiple slow stages in which she searches, composes, sculpts, makes moulds, casts objects and polishes them. For Hard Raitanen has expressly worked with hard materials and thought out how the different parts are to support and hold each other up. The components and sculptures in the exhibition are both hard and strong, but they depend on each other to be able to stand up and display themselves in space. This serves as a kind of allegory for her own work, in which, every day, she sees that her own hardness and obstinacy are not always enough; a sculptor often needs help and support with moving and carrying sculptures and materials. Here Raitanen wants to highlight the hard and the difficult as things that bring us together and get us to help each other. The sculptures in Hard have a warmth and a drama that revolve around intimacy, vulnerability, collaboration and support. Raitanen’s sculptures also have a fossil-like aspect and the exhibition can be seen as a leap far forwards in time to a point where the viewer comes face to face with historical findings dating from our own day.

Something here is reminiscent of Emmi Itäranta’s novel Memory of Water (Teemestarin kirja), a future dystopia in which the protagonist rummages through an old rubbish dump seeking information to establish the truth. But the entity that Raitanen has created is more complex than a narrative mystery. She creates an image of our time by giving shape to the pressure that exists inside and outside of us, and to the way we cope with this constant struggle and friction.

TIINA RAITANEN
Tiina Raitanen graduated from the Finnish Academy of Fine Arts in 2012. In 2018, Raitanen took project studies in sculpture for professional artists at the Royal Institute of Art in Stockholm. She has also worked in several artist residencies abroad. Recently Raitanen has shown her works in the PS-Project Studies group exhibition at Bångska Våningen in Stockholm, at OBJEKTI 4 in Espoo, and in her solo exhibition Altered Positions at Vanhan Raatihuoneen galleria in Turku. She is a member of the Association of Finnish Sculptors.

The work for this exhibition have been supported by the Arts Promotion Centre Finland (Taike) and the Finnish Cultural Foundation.