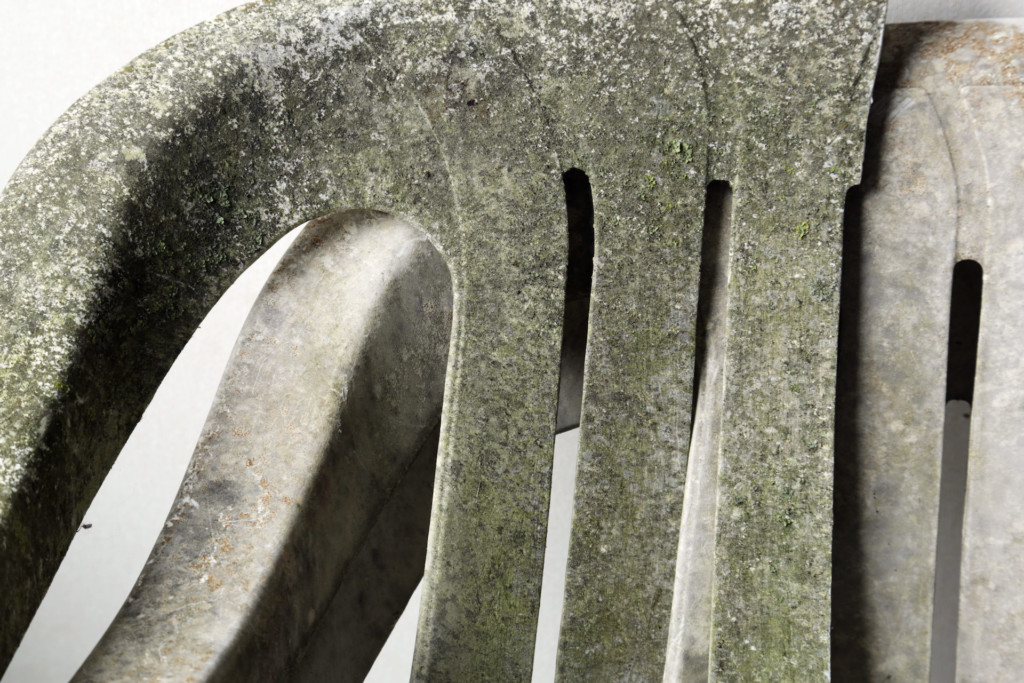 Sinne is delighted to host Sara Bjarland – a Finnish artist who has lived and worked in Amsterdam since 2007. She previously showed at Sinne in 2008. Throughout her professional career she has focused on discarded inorganic and organic waste, along with objects that she finds in the city. Initially working with photography, she has slowly but steadily gone over to sculptural modes of expression, and the body of works now being shown at Sinne consists of sculptures and a video.

The items and products that we design, manufacture and distribute are often a solution to a problem, or serve as accessories when creating our individual identities. In step with the way our value system, our needs and our behaviour are constantly changing, time also runs out for many of these objects. After a while, they become a problem in themselves, they become outdated, they are worn out and pile up in our immediate surroundings. Bjarland has an eye for these urban remnants which she collects. The objects, which have lost their function, their lustre and their value, open up to a dialogue, and she uses this material to create subtle gestures and commentaries on the economy and the culture for which it was originally intended.

In Crumple, fail, faint, fall, time is powerfully present; it has passed through the objects and all that remains is the unwanted, the rejected and the fragile. She uses familiar objects to construct an integrated whole that acts like a faded photograph from a not-too-distant era. Bjarland turns our gaze to look back at the landscape we have left behind. Venetian blinds hang from ceiling to floor  like dead office plants. Ceramic casts of exploded tyres, collected from the roadside and now spread around the room, are like fossils from an age when the internal-combustion engine was the world’s pulse and life ran on wheels. And the infamous white, polypropylene-plastic Monobloc chairs from the 1980s are like bones from dreams that died out. Ultimately this is not about the objects or the material itself, but about human beings in change, about how they grow out of their clothes like a snake sheds its skin, about how the party fizzles out, and about how anxiety builds as they slowly, but surely recognize that they are stuck and cannot get out.

Sara Bjarland
Sara Bjarland, b. 1981 in Helsinki, has lived and worked in Amsterdam since 2007. She graduated with an MFA in Fine Art Media from the Slade School of Fine Art in London in 2007, and in 2012–2013 participated in the studio programme at the Higher Institute for Fine Arts in Ghent. Latest solo exhibitions: Constant Eruptions, Hopstreet Gallery, Brussels (2020); Uncertainty and Ground Conditions, DASH, Kortrijk, Belgium (2019); Fem studier i metamorfos, Finlandinstitutet i Stockholm (2014). Group exhibitions: The Sound of No-one Listening, Corridor Project Space, Amsterdam (2019); The Prophecy of Bees, Kunstfort, Vijfhuizen, Netherlands (2016); Invasive Exotics, RAM Galleri, Oslo (2015). Bjarland was nominated for the Below Zero Finnish Art Prize 2019. Her first publication, Groundwork, was released by Art Paper Editions in 2019. She also has a solo exhibition at MUU Gallery in Helsinki 21.11.–20.12.2020.

The exhibition has been supported by The Swedish Cultural Foundation in Finland.