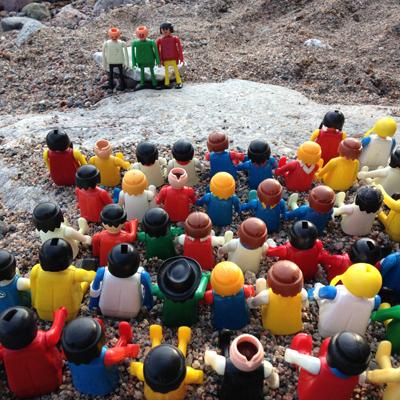 In summer 2019, Pro Artibus Foundation will be showing an extensive solo exhibition by Nina Katchadourian (b. 1968 in the USA) at both Gallery Elverket and Sinne. Katchadourian is a multimedia artist who works with video, performance, sound, sculpture, photography and public art. Her videowork Accent Elimination was shown in the Armenian Pavilion at the Venice Biennale in 2015, which won the Golden Lion for best national pavilion. Katchadourian has Finnish roots on her mother’s side and spends her summers in the Porvoo archipelago. It is more than ten years since her art was last exhibited in Finland.

Gallery Elverket will be showing her set of works titled Seat Assignment. This consists of photographs, video and sound. The work came into existence spontaneously during a flight that Katchadourian took in March 2010 and has been built on during the artist’s more than 200 flights since then. She uses a camera phone and improvises with materials that are close at hand. The result is clever, creative and humorous, and can be divided thematically into several different subcategories, such as portraits, landscapes, athletes and people sleeping.

Sinne will be screening the videowork The Recarcassing Ceremony (2016). This is a 25-minute single-channel installation constructed around the artist and her brother’s old Playmobil figures. The work recreates the ceremony that she and her brother held as children to replace two figures who had drowned with two new ones. Beyond showing two children playing with toys, the work deals with the artist’s relationship with her family.