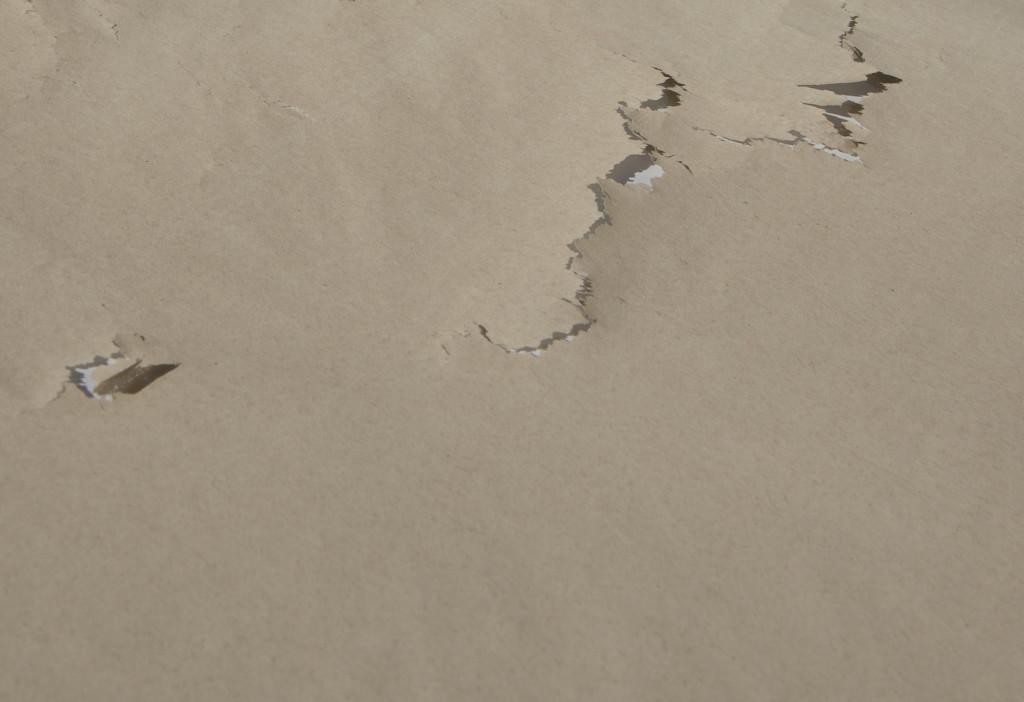 Emilia Tanner is interested in the limits of our senses, and in her art she operates on the extreme margins of our sensory register. She works with movement in time, focussing on slow changes that we can understand, and yet are unable to observe in the moment. She uses simple means, such as paper, light and shade, to create stripped-down, minimalistic works that evoke thoughts about movement and the in-between state where position is indeterminable. In her new exhibition, Sundials, Tanner combines her working methods into an entity that prompts us to reflect on our location from a broader perspective.

Paper has long played a key role as a material in Tanner’s production. For her, one important aspect is the constantly ongoing transformation occurring in the material, its disintegration and slow disappearance. The non-acid-resistant newsprint primarily used in the Sundials exhibition has numerous properties that suit Tanner’s work. This derives from the way she uses a sculptural gesture in her picture-making. She does not appliqué anything onto the paper, instead her processes rely on inducing a change in the material itself. Exposing the paper to sunlight for long periods of time or quickly burning it with a laser causes marks to appear that in turn look like something we might interpret or refer to as a picture. Nor are the works on paper immutable, rather, they will carry on being transformed by the UV light with which they come into contact in the future.

For Sinne Tanner has made a large, site-specific work, Light Recordings. Over a period of two months these large sheets of paper were installed in Sinne’s window, to be exposed to light from the sun. The negative image that emerges in Tanner’s works of this type has a cosmic dimension. She accentuates the momentum of the movements of the heavenly bodies and the relationship between them. In our everyday lives we frame the sun’s motion as coming up and going down on our firmament. This is something of a two-dimensional expression for what is a considerably more complex sequence of events, in which the earth’s rotation turns us towards the sun again and again, day after day. On Tanner’s paper this slow pulse of light and movement is registered as a darkening. With these solar works she steers the viewer to move back from the surface of the paper; her negative windows gaze out at the darkness and at the empty space yawning far beyond our own atmosphere.

Sundials also includes a series of works in which Tanner burned lines and grids into the paper using a laser. The delicately scorched perforations and lines prompt the viewer to come nearer. This closer inspection reveals regular, systematic, mechanical patterns. In contrast to the solar works, the direction here is inwards. There is a precision here, an awareness and an agenda. Tanner uses the laser to capture something human; the tenacity and repetition needed to achieve perfection. Through these digital and mechanical processes she depletes the material to the point of dissolution.

One of the strengths of her paper works is the slight shifts via which the pictures emerge, behaving like afterimages burned into the retina. In a light installation, she creates an illusory experience that utilizes this specific phenomenon. The slow, weak pulse of light occasionally verges on invisibility and is perhaps more a construct of the eye. With this Tanner ties the exhibition together, revealing how narrow the range of our senses is when we are creating an image of reality for ourselves.

Emilia Tanner (b. 1990) lives and works in Helsinki. She graduated with an MFA in printmaking from the Academy of Fine Arts Helsinki in 2021. Sundials is her fourth solo exhibition. She has previously appeared in several group exhibitions, including at Galerie Anhava, Kohta, Forum Box, Kosminen and Galleria Katariina in Helsinki. She is a member of the Association of Finnish Printmakers and Helsinki Artists’ Association. She is represented in the Finnish State Art Commission’s Collection, the Kiilto Family Oy’s collection, and elsewhere. Tanner is currently on a one-year working grant from the Arts Promotion Centre Finland (Taike).