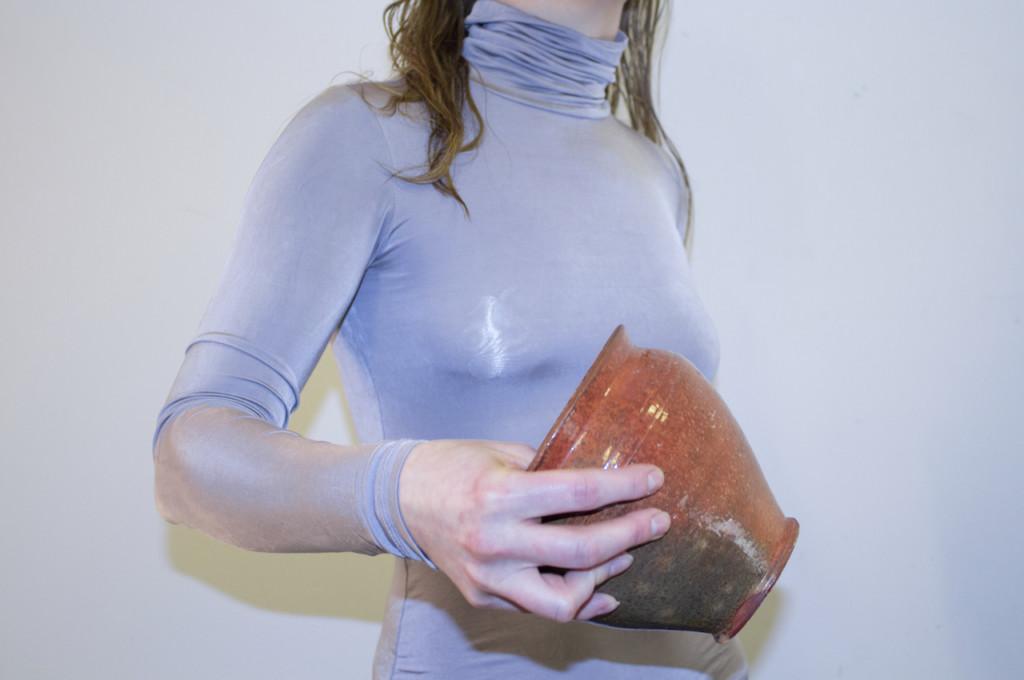 In Blue Blue Emelie Luostarinen takes a look at the relationship between the body, emotions and the surrounding world. She has drawn her inspiration from Takotsubo, the medical term for what is usually called a broken heart. Luostarinen is a painter who looks beyond the canvas, using various materials and shapes to construct a network out of the parts of the exhibition, all in dialogue with each other. Blue Blue is based on an encircling movement, and on shapes that fill the entire gallery space.

Throughout the ages, doctors and researchers have seen a pattern in the way emotional stress affects the heart, even causing heart failure and heart attacks. But it was only in 1990 that Japanese researchers, aided by angiography, were able to see actual physiological changes in the heart, and this phenomenon was given the diagnostic name Takotsubo. The name comes from a Japanese fishing pot used to trap octopus. When someone begins suffering from Takotsubo, their left ventricle actually takes on the shape of the trap. The disease is being studied extensively all over the world, but it is still something of a mystery. It has yet to be established what mechanisms trigger its onset and, at the same time, no one knows why and how patients recover. It is this puzzle surrounding recovery that intrigues Luostarinen, and which she uses as an entry point to her exhibition.

Everything is in constant motion and often has a knack of finding its own direction in the end. In Blue Blue Luostarinen has captured a movement that sweeps through the space, in one great, all-encompassing arc. Maybe it is a wave that washes over us or a net that cleans up and collects waste and sediment. Luostarinen uses the diverse elements in the exhibition to construct an emotional space where dams burst and parts break off. While this is going on, she frees painting from its medium and transfers it to other forms and materials. She brings in woven glass fibre, sheet metal, soap, metal pipe and more, and makes use of all the surfaces in the room: the floor, ceiling, walls, benches, pillars and windows. All the parts of the exhibition contain visual gestures taken from the shape of the Takotsubo, and this generates an affinity between the components, which echo each other. Everything is connected, everything is in its own place and related to something else.

EMELIE LUOSTARINEN
Emelie Luostarinen (b. 1987) was born and grew up in Sweden, and now lives and works in Helsinki. She expects to graduate with an MFA from the Academy of Fine Arts Helsinki this year. She works with painting, sculpture and installation. Blue Blue is her third solo exhibition. Her previous show, Itsy Bitsy, was a year ago in the Academy’s Exhibition Laboratory Project Room. Her work has also been shown at The Spring Salon at Liljevalchs gallery in Stockholm, in the Academy of Fine Art’s Master’s exhibition, and at the ILMIÖ Festival in Turku in 2019. She and Iida Pii collaborate in the P.I.L.E. workgroup.