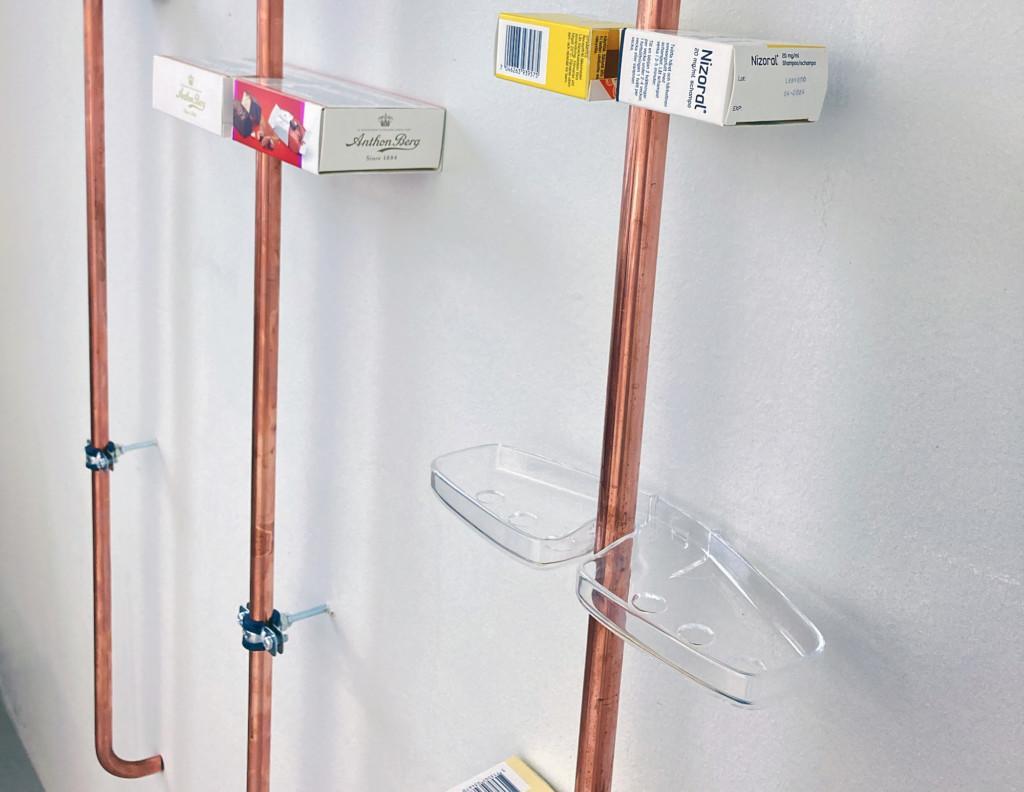 Sinne starts the new year with Denise Ziegler’s At Home in Movement exhibition. Ziegler is a Helsinki-based artist who in her conceptual art has investigated public space and shed light on questions about how we experience and make use of the urban environment. In the exhibition she takes up the idea of home and the way we hold onto a feeling of being at home despite being in a public setting. The exhibition includes sculpture, film and a work outside the gallery space that spreads out across the city.

Ziegler is interested in the city and in public space. She uses the whole of the urban environment as her workplace. She looks at and reads existing patterns, situations, routines and behaviours in the city and in everyday life. Her observations are transposed to artworks that she introduces into public space or as gestures in an exhibition space. She does this by mimicking familiar forms and structures from the urban milieu and in texts. She takes up details that often pass us by unnoticed as we move around the city.

In Ziegler’s art this becomes its power. Her works bring out the meaning of objects and functions, and the way that everything that exists in our planned, built surroundings influences us or mirrors our needs. Her focus is on the immediate experience itself, and on how the individual deals with impressions and impulses from the urban milieu both physically and mentally. It is as if she uncovers a network of connections between everything we are in contact with in our day-to-day lives. This is perhaps most tangible in Ziegler’s latest public artwork Child Bike Seat – At Home in Movement. This conceptual piece includes all the bicycles in Helsinki’s public space that are fitted with a child seat. Ziegler starts from the homely feeling kept up between the adult and the child on the bicycle, the main idea behind the work being to bring out the experience of feeling at home while simultaneously being in motion. Coinciding with this exhibition the work has recently been added to HAM Helsinki Art Museum’s public-art collection. The work will get a digital home in HAM’s collection, on public-art websites, and on the City of Helsinki’s Service Map.

In the exhibition Ziegler brings together a diverse body of works. The idea for the hanging was to have works overlap and intrude on one another. Parking 24h was originally a site-specific installation made for Pori Art Museum in 2016. It was shown in the Museum’s backyard and consists of parking spaces with lines crocheted out of cotton yarn. Now, the parking places take up a large part of the floor in Sinne’s exhibition space and serve as a kind of foundation for the exhibition. Ziegler’s aim here is not to criticize the city’s motorists or parking spaces, but to encourage residents to make active use of the urban environment, to take possession of it and to create demand. Seeing the work in the gallery becomes a play of associations that reveal how accustomed we really are to seeing these simple white lines as empty, life-size parking spaces reserved for cars. Thus, the street and the city also come into the gallery.

The videowork Go Hard – Door Closes was recorded in the Bridgestone Arena in Nashville. A hockey player skates back and forth across the rink in a figure of 8. Occasionally, Ziegler intercuts this with a heavy door that is closed silently with the aid of a silencer. The ice-hockey arena’s own acoustics amplify the sound and the ominous tension and anticipation. Here Ziegler starts from a personal experience, in which she as a hockey mom travels to hockey tournaments with her teenage sons. The film’s soundtrack can be heard all over the room and serves as background to the exhibition.

Ziegler’s artistic work is especially topical in the reality that we live in today. During the pandemic year, public space has become a stage for much that is problematic, but at the same time it can offer an opening for new ideas and change that create a more democratic and easily accessible space.

Denise Ziegler was born in Luzern, Switzerland, and has lived and worked in Helsinki since 1990. She gained a Master’s degree in Fine Arts from the Academy of Fine Arts, Helsinki, in 1997 and completed her doctorate in Fine Arts (DFA) there in 2010. Currently Ziegler works as a University Researcher at the Academy of Fine Arts at the University of the Arts Helsinki. She has had solo exhibitions around Finland including at Titanik, Kiasma, Pori Art Museum and galleri Leena Kuumola. Her most recent solo exhibition was at Forum Box in 2018. She has been exhibiting internationally since 1989, and her art is in the collections of the Finnish National Gallery, Museum of Contemporary Art Kiasma and HAM Helsinki Art Museum in Finland, and Olten Art Museum in Switzerland. She has also made public works in Helsinki, Vantaa and Espoo, and in Belgium and Switzerland. Her most recent public work was made as part of the Sculpture Expanded exhibition in Helsinki.