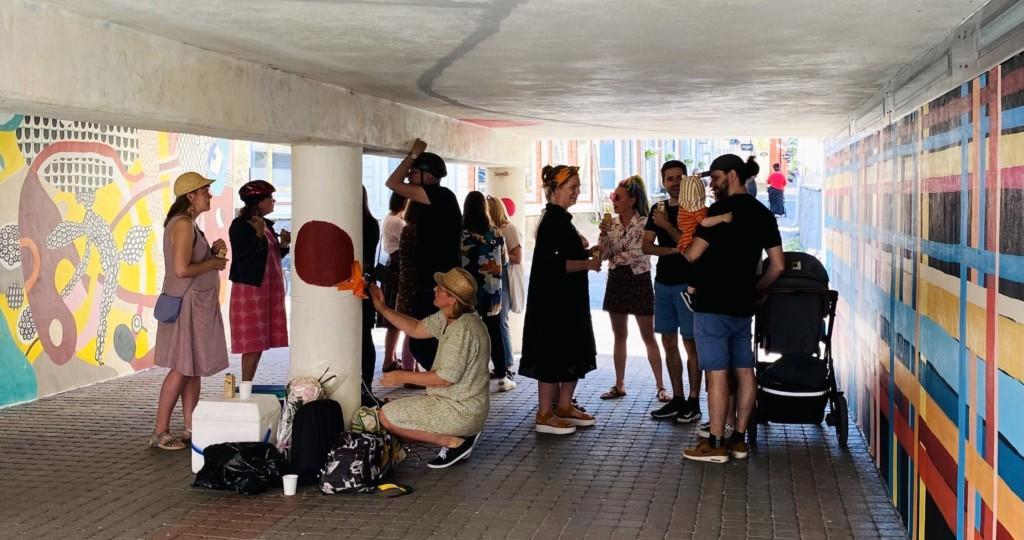 In summer 2021, Pro Artibus Foundation is collaborating with Galleri Gata in Porvoo. This year, the visual artist Annika Bergvik-Forsander and Galleri Gata’s founder, the visual artist Ylva Holländer, have given the pedestrians underpass beside Old Porvoo a new look. The Foundation has joined with Holländer to invite Bergvik-Forsander into the gallery.

The unifying factor between these two visual artists is colour and organic forms. They have collaborated loosely, creating a colour dialogue in time and space. Holländer is simultaneously carrying on a process in which the same painting is modified from year to year, adding new colours, patterns and forms to the original. The painting is now in its fourth year and the different elements constitute an increasingly rhythmic collage that take colours as its starting point.

Galleri Gata differs from other art galleries in that it only has two walls, but it still feels like its own bounded space. This is not about traditional mural painting, but rather Galleri Gata aims to give contemporary art greater visibility in a public, urban space. The project is driven by a desire to reach a broader public. But it also says something about how our urban environment can be made more amenable. Art with its content, colour and form can transform places that are not otherwise considered interesting.

Ylva Holländer took the initiative to open Galleri Gata in 2018. Galleri Gata changes shape once a year. In its first year, Jaakko Rönkkö was the invited artist, in 2019, it was Sirkka Tapio and, last year, Elina Sarlin. The project is also a collaboration with the City of Porvoo.