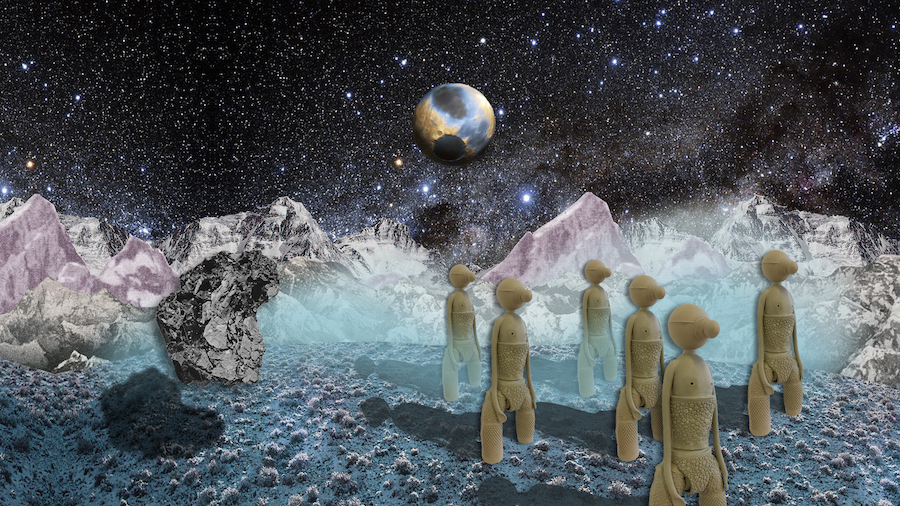 Pro Artibus has invited the Icelandic duo Berghall (Olga Bergmann and Anna Hallin) for a residency at Porvoo Art Factory for October and November 2021. Part of the residency is an exhibition at Porvoo Art Hall’s Gallery Fikka 29.10.–21.11.2021. At Fikka they will be showing their new video animation New Wilderness. The collage-centred work lasts 8 minutes and consists of multiple layers of images of familiar landscapes and unidentified objects and settings.

The duo are Olga Bergmann (b. 1967 in Reyjkavik), whose background includes sculpture studies at California College of Arts and Crafts, and Anna Hallin (b. 1965 in Sweden), who studied sculpture and ceramics at Mills College, California. They share an interest in evolution, biology, genetics, ecosystems and social behaviour and, since 2003, they have collaborated under the name Berghall.

Berghall call into question various types of classification, everything from gene mapping to the way history is written. They interrogate the different methods employed by art and science to understand the meaning of the world and to generate knowledge. The duo often make site-specific installations resembling archaeological finds from other cultures, which they present in the form of imaginary documentation, sculptures, drawings, videos and photographs in order to chart out distinct social behaviours and ways of living, in contrast to our own society and origins. Berghall are known for infiltrating scientific exhibitions, that is, for placing fictive objects and fictional nature films among the objects and information on display. This was the case at The Icelandic Seal Center and Icelandic Museum of Natural History. In 2010, they excavated a previously unknown civilisation at The Icelandic Folk and Outsider Art Museum. Berghall have participated in various architecture projects and competitions in collaboration with the architects from Arkibúllan in Iceland, such as making art for a graveyard in Reykjavik. In 2013, they won first prize for their proposal for a public artwork in a new maximum-security prison in Reykjavik. The work makes it possible for prisoners to watch birds outside the prison in real time.

Berghall have, for instance, exhibited at: The National Gallery of Iceland; Kling and Bang Gallery in Reykjavik; the Momentum Biennial in Moss, Norway; Bozar Centre for Fine Arts in Brussels; Einar Jónsson Museum in Reykjavík; and The Factory, Center for Contemporary Art in Hjalteyri, Iceland. In 2016, they took part in Pro Artibus’ group exhibition of Icelandic artists in Ekenäs.