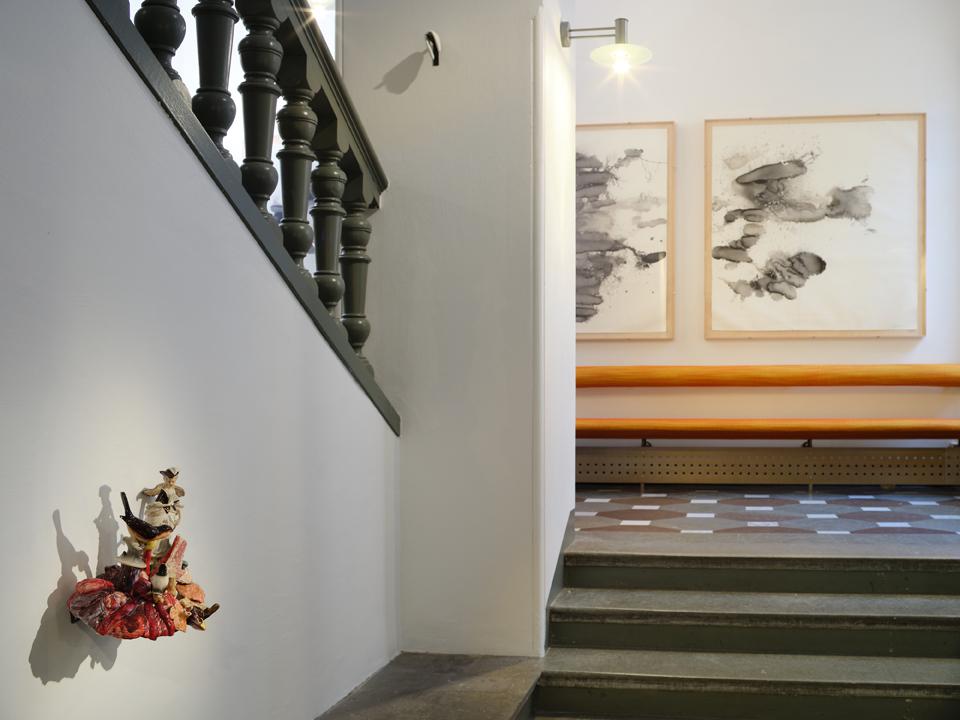 The art of the Finnish-Swedish visual artist Ylva Holländer contains a lot of small details that make up larger wholes. She shows us that reality is an unfathomable place, with numerous phenomena large and small for us to ponder. Nature and art history are constant sources of inspiration for her highly diverse expression. For instance, Holländer is influenced by 18th-century natural-science studies, but she breaks away from the scientific by adding an artistic dimension of playfulness. Her paintings, drawings and sculptures are like multi-dimensional encyclopaedias in which she investigates what life looks like. Everything is incorporated into one and the same integrated experience, with everything also seeming to happen all at once: we can view the world from above, from below, from the inside and the outside. Recurrent features are the threads and roots that appear in picture after picture – there is an endless flux that has neither beginning nor end. This brings in a constant rhythm and collisions, even explosions. No one phenomenon is isolated, rather, the nearest is bound together with the one farthest away.

Holländer views the things around her as phenomena without being for or against, and neither time nor space loom large in her works. Nor does she foreground the human being as the crowning detail of the piece; in her drawings bacteria and maggots are just as important – the meaning lies in existence itself. The human can be found, among other things, in the form of an innocent little lamb, but also as an exhausted tongue. Internal organs are mixed in with a 19th-century ruff. Holländer also depicts landscapes within landscapes. Forest recurs in the pictures, as do fungi in all shapes and sizes. The sea is there as another theme, together with fish and frogs. Holländer has painted in ink, with the large sheets of paper on the floor, and has let chance guide her, but she also simultaneously directs the process herself, building up images with meticulous drawing.

Ylva Holländer was born in Boden, Sweden, in 1955 and lives and works in Porvoo, Finland. She attended the School of the Finnish Art Academy in 1978. She has made several public works in Porvoo. She has exhibited, for instance, at Gallery Hippolyte, Forum Box, Galleria G, tm-gallery and at Mänttä Art Festival in Finland. Holländer started up and now runs Galleri Gata in Porvoo, an outdoor gallery where she is constantly developing her painting together with guest artists. She chooses her techniques according to each idea in a multifaceted way, and has also experimented with videoworks and large sculptures and installations. Her brightly coloured paintings also reflect an aspiration to three-dimensionality.

More information and pictures of the installation is to be found here: https://proartibus.fi/en/ylva-hollander-finnish-institute-in-stockholm/