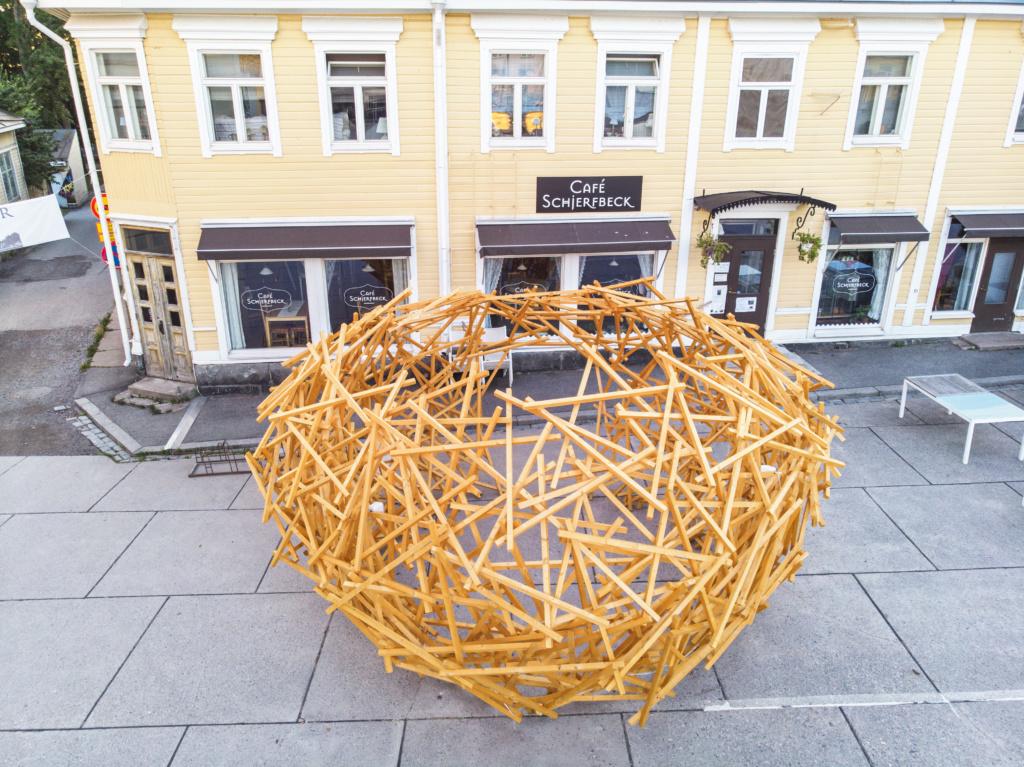 Bird’s Nest consists of yellow triangle formations in wood that have been bolted together intuitively by the visual artist Jan-Erik Andersson, starting from the specific site where it is being exhibited, along with a sound installation. The sound elements are produced by the US sound artist Shawn Decker. The viewer can sit down inside the organic structure and take in the sound installation. Bird’s Nest is thus a site-specific, interactive sculptural work and has been shown, usually in public places adjoining cafés, since 2001.

Andersson imitates the way birds create things, taking a triangle and attaching it to the next one. The form is not measured out, but is found in the artist’s brain. He uses this structure to investigate new methods for architecture by starting with shapes and modes of production that can be found in nature. At the same time, the project criticizes modernism’s method of using modules to create larger wholes. A module – the triangle – is used here, but the result is a structured chaos, which is also very stable. Decker’s soundscape is artificial, but uses the rhythms and sounds of nature. It synchronizes with the surroundings and can be seen as a form of ornament. The need for ornament in our surroundings was elucidated by Andersson in his doctoral dissertation at the Academy of Fine Arts, Helsinki, in 2008. Bird’s Nest has been exhibited in various versions since 2001, among them, in Berlin, at Retretti, Kiasma, Wakefield, Hyvinge, Mänttä, WAM in Turku, and in Chicago. The work is in Pro Artibus’ collections.

The visual and performance artist Jan-Erik Andersson (b. 1954) is known for his imaginative, brightly coloured environmental artworks. The total work of art and research station Life on a Leaf in Turku – his doctoral work for the Academy of Fine Arts – is a building that the artist has also lived in, but which will now be an artist’s residence. Andersson and the architect Erkki Pitkäranta have created several buildings and public spaces. These are colourful, ornamental works, often based on stories. He is something of a maximalist who engages in a dialogue with modernism, frequently using primary colours, as well as details from his own life story. These are boundary-crossing works in which art, science, enterprise and community building meet, for example, via an onion sauna or ornamentation on Turku’s Theatre Bridge. Ever since the start of the 2000s, Andersson has been making performances, for instance, with food or about cleaning. Food and language, for example, are viewed as being more fundamental for defining identity than national boundaries. Andersson has shown regularly since the 1980s, most recently last year, solo at Gallery Sculptor in Helsinki. He has often shown abroad, too, for instance, at the Earagail Arts Festival, Clady, Northern Ireland, and the Currents New Media Festival in Santa Fe, USA. Andersson has lectured, for instance, as an invited speaker at Yale School of Architecture, Carleton University in Ottawa, and at the Henry Moore Institute.

The sound artist, composer and sculptor Shawn Decker creates sound and media installations, and writes music for live performances, film and video. Decker’s work occupies the borders between composing, visual art and performance. He makes use of both physical and electronic tools to investigate and simulate natural and unnatural worlds. He often gets his material from processes in nature and larger settings. Decker frequently collaborates with other visual artists, as he has with Jan Erik-Andersson since the 1990s in the form of, for example, an apple concert or a bird’s nest. Decker’s works have often been performed in the USA and Europe at a number of different venues, such as: the Museum of Art and Design in New York; the Victoria and Albert Museum in London; the 2003 Biennial of Electronic Art in Australia; Art Basel Miami; Klosterruine in Berlin; 21st Century Museum of Contemporary Art, Kanazawa, Japan; Kiasma, Waino Aaltonen Museum of Art in Turku and many more. Decker gained his doctorate in Music, music theory and composition from Northwestern University in 1987 and is now a Professor at the School of the Art Institute of Chicago.