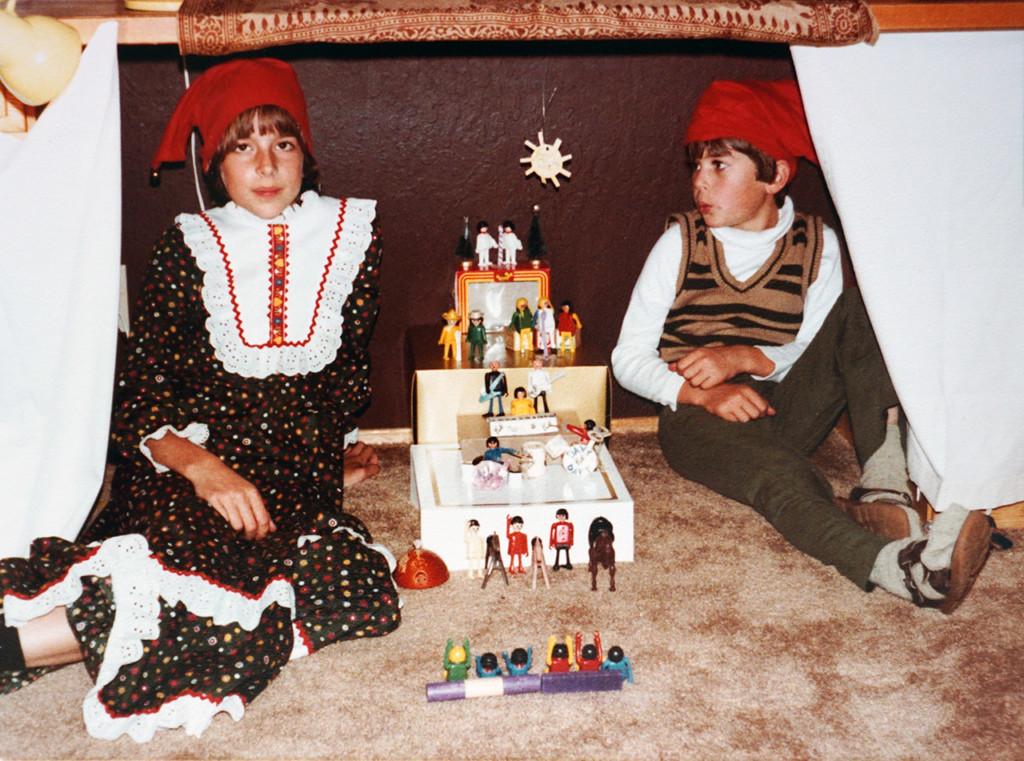 Nina Katchadourian (1968) is a multi-disciplinary artist from the USA, whose previous solo exhibition in Finland was at Turku Art Museum in 2006. She has grown up spending all her childhood summers with her family on the island of Pörtö in the Porvoo Archipelago. Katchadourian’s works have recently been shown in the Armenian pavilion at the Venice Biennale in 2015, and a survey exhibition of her work, entitled Curiouser, toured the USA in 2017-2018.

This summer, Nina Katchadourian, whose mother is Finlandswedish, is exhibiting simultaneously at both of Pro Artibus Foundation’s exhibition spaces, Sinne and Gallery Elverket.  Each space will host a different body of work: The Recarcassing Ceremony (2016) will be shown at Sinne, and Seat Assignment (2010 and ongoing) at Gallery Elverket.

The Recarcassing Ceremony (2016) is autobiographical video piece about a game that Katchadourian and her brother Kai played during their childhood summers on Pörtö. When a viewer witnesses the invented ceremony created by the children, it brings to mind the German writer Friedrich Schiller’s idea of play as a precursor to art. It also becomes clear how important imagination and empathy are for the experience of art.

In the so-called Recarcassing Ceremony the Playmobil figures Matti and Steven Båtsman, who have drowned in the sea, are brought back to life through various rituals. The work gives a nuanced view of the boundlessness of the children’s creativity, and also of the fascination with catastrophes, while simultaneouly evoking a sense of what rich, diverse and surprising things can be dealt with through play. The Recarcassing Ceremony is made particularly exceptional by the soundtrack – an original tape recording of the ceremony made in Katchadourian’s childhood, documenting what is arguably one of her first collaborative projects.

Seat Assignment (2010 and ongoing) is a series of works consisting of photographs, video and sound. The project is made using only a camera phone and materials close at hand. The basic principle is a strict one: Katchadourian can use only the objects and materials that she has with her or finds around her. The project began spontaneously on a flight when she decided to try to use the available time to make art, despite the restricted circumstances.

In 2012, the series entitled Lavatory Self-Portraits in the Flemish Style went viral on the Internet, when both The Guardian and The Huffington Post published pictures from them. In these photographs, which mimic Flemish portraits, Katchadourian has created lace collars and headdresses for herself using materials like paper towels, toilet-seat covers and disposable cups. The themes in Seat Assignment as a whole also comment on aspects of flying such as speed, cramped space, and the threat of accident. The project  demonstrates how often Katchadourian can find tremendously interesting content in surprising objects and unlikely circumstances.

These summer exhibitions give us a chance to see Katchadourian’s recent work, and also to explore how concept-driven art can be a rich experience full of humor while still retaining its intellectual insightfulness. Nina Katchadourian is truly an idiosyncratic, autobiographical and exceedingly versatile artist.

Nina Katchadourian earned her M.F.A. in Visual Art from the University of California in 1993. In Finland her exhibitions have included a solo exhibition at Turku Art Museum in 2006 and in the Pro Artibus Foundation-produced Syner, Sights, Näkyjä exhibition in Tammisaari in 1998. She has shown widely in the USA and Europe. She lives and works in Brooklyn and Berlin.