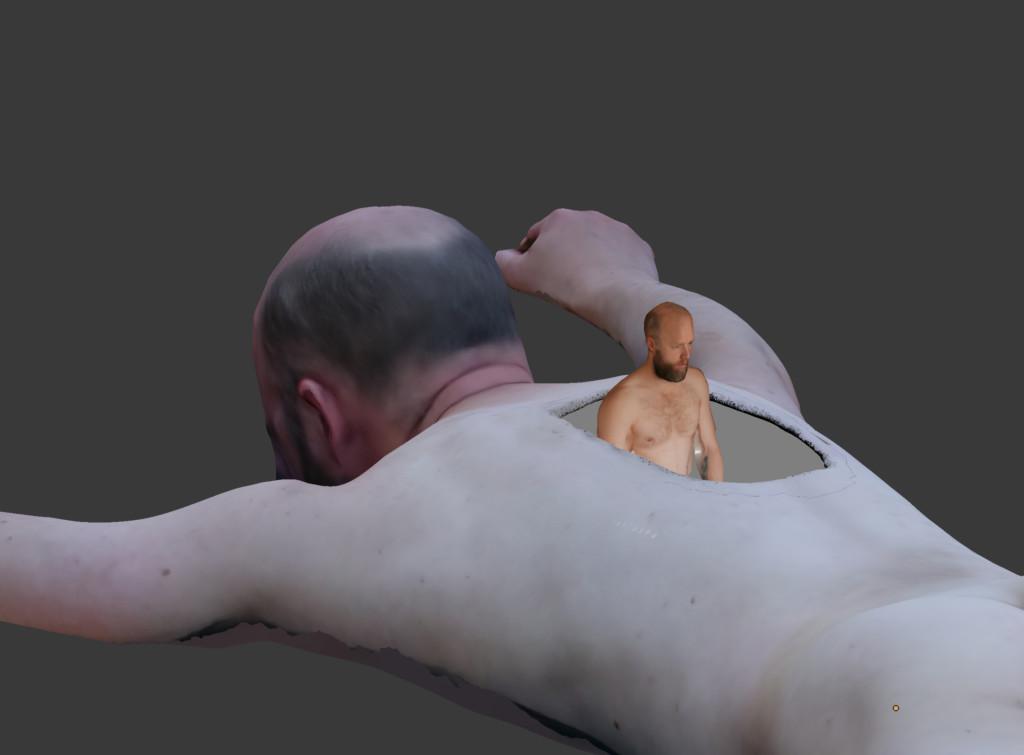 Between the idea and the reality
Between the motion and the act
Falls the Shadow.
T.S. Eliot, The Hollow Men (1925)

Sinne has the pleasure of showing the first solo exhibition in Finland by the Danish artist Morten Modin. Modin is a sculptor who works in a broad range of materials, making open-minded use of new methods and techniques. All the works in the Data Soul exhibition have been through a digital process, either being output by a 3D printer or CNC-milled. Modin looks at the human being in transformation, in step with technical developments, raising questions about identity, experience and reality.

Data Soul is an intimate exhibition where human and machine meet and boundaries are erased. This is a posthuman portrait in which human, data and material flow into each other to form something concrete. Here Modin is displaying a series of CNC-milled mattresses, a reflective facemask, and a self-portrait. We see the artist himself as a spectral figure, a naked mannequin lying lifeless on the floor. With a hollow back he has taken on the role of huldra, a mythic Nordic creature who enchants and leads the viewer into a fantasy. The mattress reliefs are the artist’s mother’s bed, and hanging on the wall is a larger facemask with a reflective mirror surface.

Despite the fact that the 3D printer has been adopted by today’s artists, we still rarely see the output sculptures as such in exhibitions. In contrast, the technique is often used for prototypes or models that are then elaborated, polished and cast in classical materials, such as plaster, bronze, aluminium and plastic. Modin opts to scan in his own compositions and shows the raw printout or milling as it is. His working process has resemblances to digital photography. Like a digital camera, the 3D scanner, too, creates a computer file that can either continue to function in a digital world or then we can choose to output it in multiple copies. Modin himself refers to his output sculptures as three-dimensional shadows. They are thus not something complete in themselves. They do not contain all the information, but a visual whisper, an intimation of an object, a place or an event, frozen in time.

Overall, in Data Soul Modin succeeds in conveying something personal and private, but also something topical that concerns us all. In this exhibition he visualizes our relationship with the digital realm. While, on a global level, we are fighting against an ever-expanding volume of misinformation, a fundamental transformation is simultaneously occurring within us as people. The boundary between ourselves and what happens online is becoming steadily more diffuse. We are increasingly absorbed into the torrent of algorithms, and have already largely gone beyond the point where it is normal to feel incomplete if our mobile phone or computer is not close to hand. Technology has become a leak through which we seep out, and into new, unexplored regions. Modin captures this breaking point where we transition between body, polygons, dreams and nostalgia.

Morten Modin graduated with an MFA in 2014 from the Royal Danish Art Academy, Copenhagen. Modin also studied at Academy of Fine Arts Helsinki in 2007-2008. After graduating he was selected to exhibit at ARoS (Aarhus Fine Art Museum) as one of the new generations front runners. Since then he has had several exhibitions in art institutions such as Kunsthal Nord (2015), Vejen Fine Art Museum (2013), NordArt (2017), Huset og kunst og design (2018) and Kunsthal Kongegaarden (2020). In 2017 he received the talent award for young artist in Denmark (Carl Nielsen og Anne Marie Carl-Nielsens Reward) for his sculptural practice. He has been supported by the Danish Art Council with both working grants and production grants.