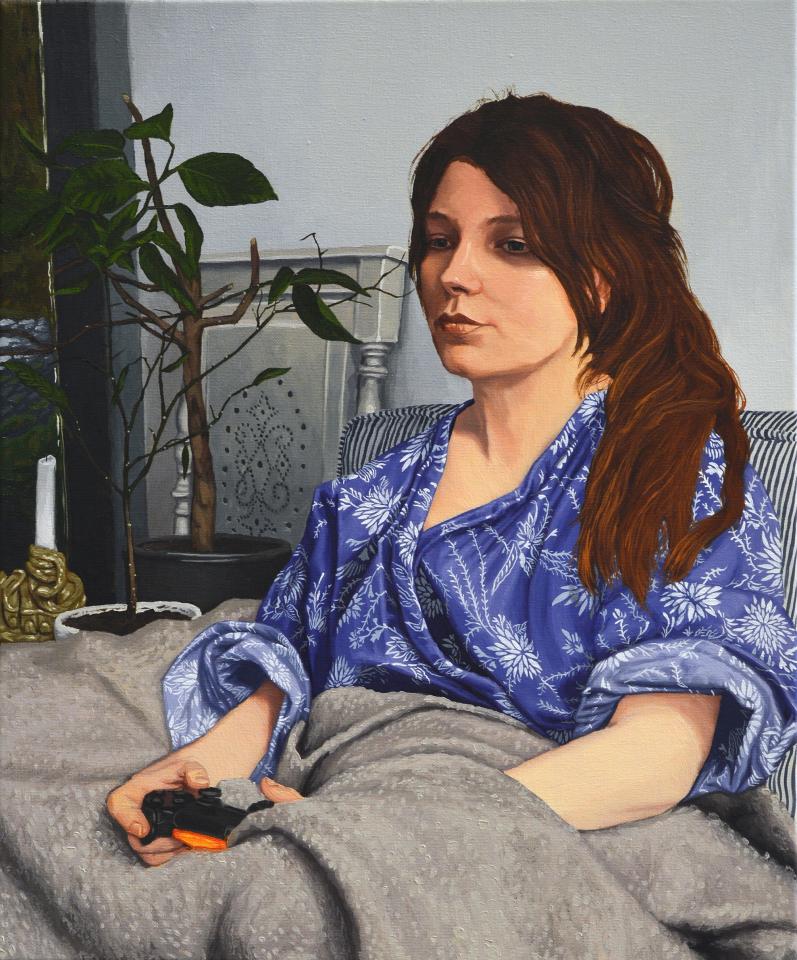 The Foundation’s collection is older and less well-known than a surprising number of people think. Collecting began in 1957 on the initiative of the Swedish Cultural Foundation in Finland and, since then, a large portion of the works have been sited in various non-profit communities around Finland’s Swedish-speaking and bilingual areas. The collection is a public secret, and works from it can be found in the most unexpected places. Only the little plaque beside a work reveals that it belongs to the Pro Artibus collection.

Shown here are only some of the artworks acquired or commissioned during 2013-2019. They give a good idea of the diversity of contemporary art and the way artists work with both traditional and new media. A small-scale player on the contemporary art scene can also be quite agile and open-minded in its artwork acquisitions, as will be evident to viewers when they see this selection.

For the exhibition, works have been chosen that are in some way mysterious, or which deal with things that have been kept quiet or concealed. They might comment on the interplay between public and private, or talk about what goes on between viewer and work in an intimate moment. The personal nature of art and shared moments spent with artworks are particularly important during these pandemic times, when contacts between people are few.

The choice of works reflects the Foundation’s collection policy, which is expressly aimed at accumulating works by Finnish-Swedish artists or contemporary art related to Finnish-Swedishness. They give a good idea of the diversity of the contemporary art scene, in both its expression and subject matter. Collected Secrets shows works that are difficult to site, either technically or due to their fragility. For example, textiles or other light-sensitive materials affect the display of an artwork, and the usual ten-year siting is not possible.

The exhibition tells how the private is revealed in art. Events from personal history, memories, inner experiences, use of the artist’s own voice or other aspects of the self, portraits, family history, or using those close to the artist as models are just some ways that the personal is brought into artworks intended for public display. This reflects the political nature of the personal and speaks of the way contemporary artists engage in the diverse discussions of their day and of how their works comment, not just on private experiences, but on society, too. Art takes its audience into the multi-stranded core of humanity to face key questions.

Kenneth Bamberg (b. 1981 Maarianhamina) graduated with an MFA from the Aalto University School of Arts, Design and Architecture in Helsinki in 2011. He debuted as an artist in 2007 and mainly works with photography, but also makes videos. His works frequently deal with masculinity and its definition. He has, for instance, photographed saunas, Turkish oil wrestlers, and outboard motors. In his latest project, funded by Kone Foundation, Bamberg is doing artistic research on male victims of spousal abuse. Animating a Doll brings together Bamberg’s time on a residency in Rome and the horror-film hobby of his youth.

Saara Ekström (b. 1965 Turku) graduated from Turku Drawing School (Turku Arts Academy) in 1986, the year she also debuted as an artist. In the first half of her career she mostly worked with painting and graphic art, but has subsequently switched to photography and the moving image. Ekström has had dozens of solo exhibitions and her works are shown around the world. This artist who has made five public works has won prizes on several occasions, and most recently, in 2018, she received the Avek Award for media art. Ekström’s works are in collections in Finland, Sweden and the USA. The double portrait of Björn Teir and Wivan Nygård-Fagerudd in video form (2014) is a good example of how she comments on and innovates in traditional art genres in her works.

Carolus Enckell (1945–2017) was a Finnish visual artist who studied at the Free Art School in 1966–1969 and was its Rector in 1988–1995. He also taught at other art schools in the Nordic countries. Enckell was Editor-in-Chief of Taide (art) magazine in 1984–1990. His works are in all the most important art museum collections in Finland, and elsewhere in the Nordic countries. He won several awards, including the Pro Finlandia medal and second prize in the Carnegie Art Award in 2001. Enckell made 11 public works, the last, begun in the Victoria Quarter of Jätkäsaari, Helsinki, in 2018, was made together with Silja Rantanen and completed only after his death. The title Caput mortuum refers to the brownish-purple colour derived from iron oxide. The Latin words, especially in alchemy, mean “dead head” or worthless remains. The four-colour combination both stimulates and calms, and is a good example of Enckell’s works, which are intended for both mind and heart.

Beryl Furman (b. 1953) is a Finnish visual artist. She studied at the University of Art and Design Helsinki in 1972–1977, the Free Art School in 1977–1978, and the School of the Fine Arts Academy of Finland in 1978–1983, as well as being a private student of Sam Vanni and studying at the Academie Julien in Paris. Furman made her debut in 1981. Her works are in numerous Finnish collections and she is a member of the Finnish Painters’ Union. She has worked as a portrait painter since 1982. The title of Furman’s four-metre-wide Where do we come from? Who are we? Where are we going? refers to Paul Gauguin’s (1848–1903) magnum opus. The pair of eyes looking out from the darkness of Furman’s work awaken powerful mental images of imprisonment and isolation. Furman has observed that her work comments on the moral problems of fur farming. It is also a study of the guilt that we have to face.

Karin Hellman (1915–2004) debuted in 1939 at Kunsthalle Helsinki. She lived and worked in Porvoo until her death in the 1940s. Hellman’s production consists of paintings, collages and textile works, but she also published a collection of poems. Her works are in numerous Finnish museum and private collections, and also some abroad. As an artist Hellman was a multi-faceted visionary who made copious experiments, and won prizes from the City of Porvoo and The Swedish Cultural Foundation in Finland. In 2017, Pro Artibus Foundation published a wide-ranging volume on her and her husband Åke Hellman’s (1915–2017) art to accompany a retrospective exhibition of their works. Tragedy is a good example of Hellman’s art, since this collage made on ordinary rag rugs captures the archaic, ambiguous mood of Greek tragedies, while still preserving a connection with archaic materiality.

Johanna Lecklin (b. 1972 Helsinki) gained her PhD in Fine Art from the Uniarts Helsinki Academy of Fine Arts in 2018, having completed her MFA in 2003 from Helsinki Academy of Fine Arts and an MA from the University of Helsinki in 2008. She works with photography, the moving image and participatory art, and has had numerous solo exhibitions starting in 2001, the most recent at Museum Gustaf in Mänttä in 2019. Her works are in many Finnish museum collections and have been shown around the world. Lecklin has received several awards, including Finnish Art Society prizes in 2013 and 2001. Besides the public aspect of parties, Crayfish Theatre also shows what happens in the background. The work was commissioned for the Crayfish Party exhibition on the phenomenon of crayfish parties common among Swedish speakers in Finland.

Stefan Otto (b. 1969) lives and works in Stockholm. He graduated from the Royal Institute of Art in 2001. Otto made his debut in 1999 and has had numerous solo exhibitions, especially in Sweden, but also in the other Nordic countries. He particularly works with photography and video. He had a solo exhibition at Sinne in 2014. His works are in numerous Swedish collections, but also in collections in Norway, France, Finland and the USA. Descent deals in a poetic, associative manner with the fate of Otto’s grandfather in post-Second World War Europe. It combines individual and universal experience of the past with its significance in the present moment.

Patricia Rodas (b. 1972) lives and works in Vaasa. She graduated from Novia University of Applied Sciences in 2002 with a BFA in Photography. Since 2012, her works dealt with domestic violence and its effects on people’s lives. In Rodas’ output texts and often large-format photographs are interlinked. The three photographs in The Most Intimate Hideways series are simultaneously both intriguing and menacing. They are poetic, open-ended artworks that can be approached in many ways.

Hans Rosenström (b. 1978 Lohja) is a Stockholm-based visual art who gained his MFA from the Academy of Fine Arts in 2007. He is a multifaceted artist who is particularly known for his installations in which sounds and stories create striking experiences. Rosenström has shown, for example, at the Moderna Museet in Stockholm and the Palais de Tokyo in Paris. His works are in the collections of Pro Artibus, Kiasma, Amos Rex, and EMMA – Espoo Museum of Modern Art. Rosenström received the Finnish Art Society’s Ducat Prize in 2011 and a William Thuring Prize in 2016. In Good Faith is a sound installation in which viewers hear the UN’s Universal Declaration of Human Rights, while it also records the sounds around it. The recordings become part of the work’s sound world, until they are deleted. In other words, the work is changeable.

Joel Slotte (b. 1987 Kokkola) is a visual artist who lives and works in Helsinki. He first studied at the Nordic Art School 2007–2009, and then at the Academy of Fine Arts, graduating in 2016. Slotte is a multifaceted artist, who paints, draws and makes ceramics. His works are in the Kiasma, Pro Artibus, HAM and other collections. His most recent solo exhibition was at TM-Gallery in Helsinki in 2019. His works are like secret journeys into art history, from where he gets ideas for works in which people from the present day appear. The paintings The Mussel Listener and The Convalescent are good examples of this secret alliance between tradition and the present day.

Magnus Strandberg (b. 1980 Hanko) is a visual artist and freelance translator who lives and works in Helsinki. He graduated with an MA in art from the Aalto University School of Arts, Design and Architecture in 2015. His previous solo exhibition was at the Asbestos Art Space in Helsinki in 2019. Strandberg’s works are in the Pro Artibus collection. His next solo exhibition will be at Fotocentrum Raseborg in Karjaa in November 2020. Nocturne is based on Strandberg’s own experiences and memories, in which image and language are interlinked, creating an ambiguous experience of a chance encounter.

Eva Törnwall-Collin (1896–1982) was a Finnish painter who made her debut in 1915 and had her last exhibition in 1981. She initially studied at the Drawing School of the Finnish Art Society 1912–14 and then at the Free Art School 1914–15. The monumental paintings (1937) in the foyer of The Swedish Theatre in Helsinki are among her best-known works, but she was a versatile artist whose works were shown in exhibitions in Finland and abroad. Törnwall-Collin taught Anthroposophical colour painting, and the mystical aspects of her production have attracted a lot of attention in recent years. Railway Carriage is a nuanced depiction of the meeting of a person’s inner and outer worlds.