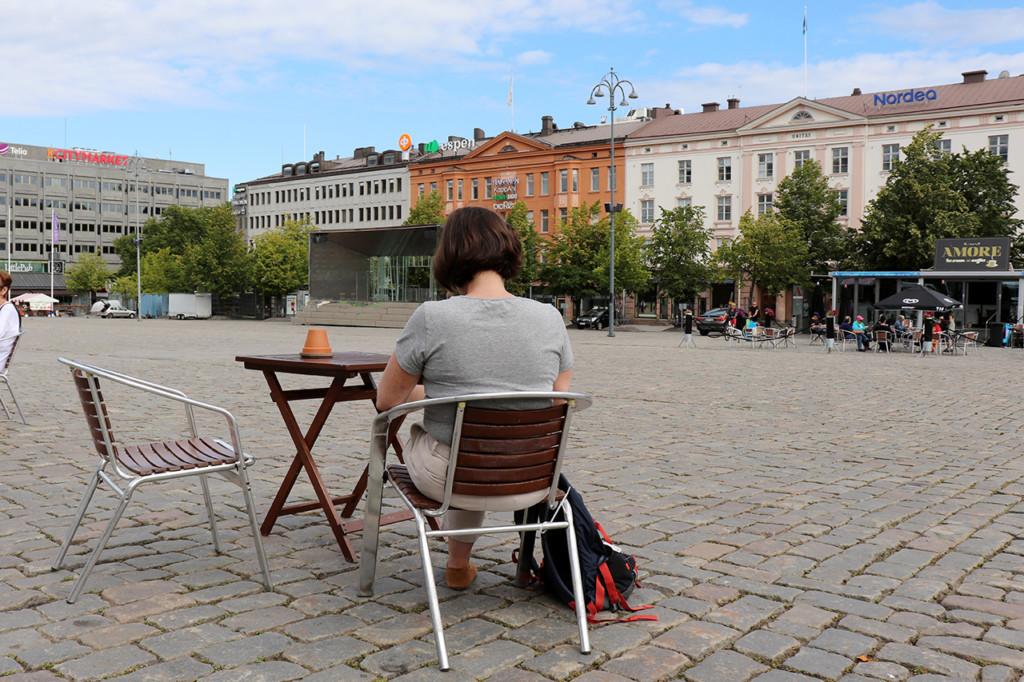 Text as Art is a hybrid genre situated somewhere between word and image. For five days in September 2020, five writers invited by Pro Artibus Foundation’s artist in residence* will jointly use words to give their impressions of the Market Square in Vaasa.

There will be a discussion of the artform and of the group’s experiences of co-writing at the Ostrobothnian Museum café, Museokatu 3, 65100 Vaasa
at 15:00-17:00 on Thursday, September 17

The inspiration for collective writing comes from Georges Perec and his experimental book Tentative d’épuisement d’un lieu parisien, published in English as An Attempt at Exhausting a Place in Paris. Perec observed the Place Saint-Sulpice in October 1974. His idea was to draw attention to the seemingly insignificant and to notice what takes place when nothing special is happening. Perec noted the date, time, place and weather, and then went on to write a list of what occurred within his field of vision. He returned on three successive days, and himself gradually became one of the recurrent figures on the square. His writing work in turn transformed what he was observing; the square became a text and a written rendition of a public space.

In August 2017, Lena Séraphin together with eight other artists did a rerun or remake of An Attempt at Exhausting a Place in Paris for three days and nights on the Rådhustorget (town square) in Tammisaari, but, instead of writing alone like Perec, they wrote as a group.

Lena Séraphin has invited a new group to write in a public place. Between September 14 and 18, 2020, they will write on the Market Square in Vaasa. On this occasion, the participating writers will come from different professional backgrounds. For some of them the place is a new one, while for others it is very familiar.

As before, the inspiration comes from Georges Perec, but now in a wider sense. As an author Perec placed various restrictions on himself. For example, he wrote a book entirely without the letter E (La Disparition or “The Disappearance”, translated into English as A Void). In Vaasa the intention is to write collaboratively from a more methodical viewpoint and for the group to address the way that restrictions and limitations help them to focus, and how this directs their attention and concentrates their awareness. The participants will propose various ways of writing, try out these proposals together, and discuss how they differ from each other, along with the ways they influence perception of the site and writing about it.

In the conversation on Thursday, September 17, the workgroup will discuss the experiences and observations they have accumulated during the process of using words to collectively visualize the Market Square in Vaasa, and also read out excerpts from what they have written. Attendance is free of charge. The conversation will be in Swedish, Finnish and English. The Ostrobothnian Museum café will be open.

Collaborative writing on Vaasa Market Square is a collaboration between Pro Artibus Foundation, the Faculty of Education and Welfare Studies at Åbo Akademi University – Vaasa and the artist-run initiative Platform ry.

*The Pro Artibus Foundation’s Solsidan residence in Vaasa was founded in 2019, when the visual artist Lena Séraphin began as artist in residence, and collaborates with the Faculty of Education and Welfare Studies at Åbo Akademi University – Vaasa.

The participating writers are: